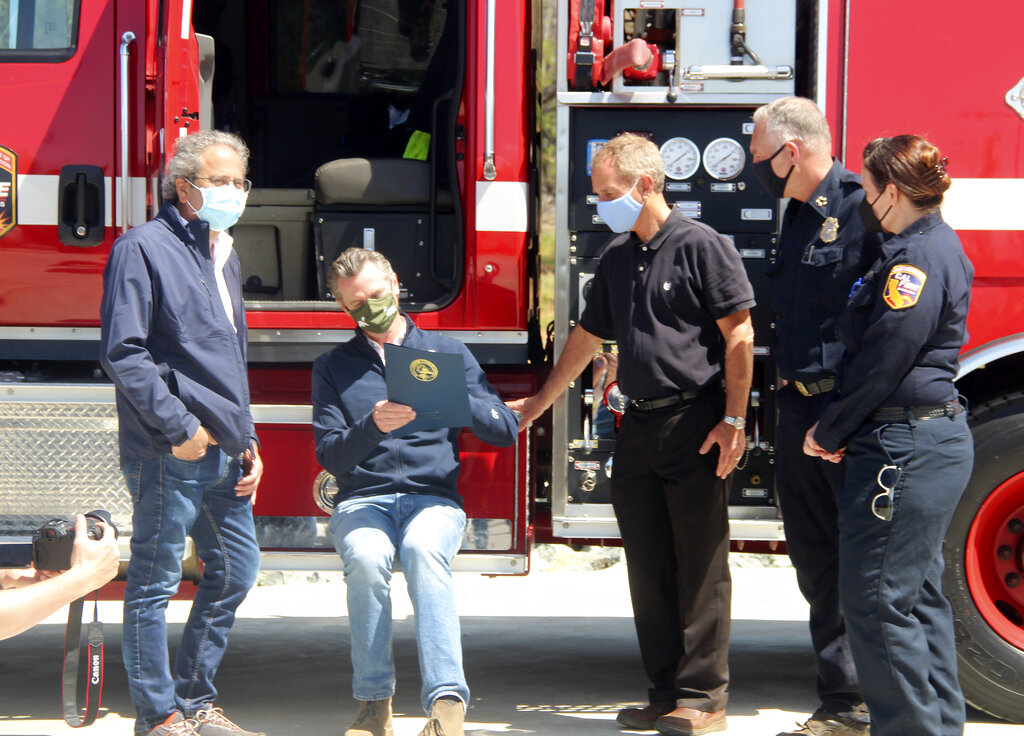 California is in such an urgent race with another devastating wildfire season that officials began soliciting local project ideas even before they had money to pay for them. It faces such a threat of drought that the governor said Tuesday that he has executive orders drafted and ready to sign as needed.
In normal years, the worst of the fires don’t start until late summer or fall, leaving a window through about May to thin forests, clear buffer zones designed to slow the spread of fires near communities, and beef up the state’s seasonal fire crews.
Not this year, officials said.
A dry winter is already blending into a tinder-dry summer that has produced twice as many wildfires as this time last year, Gov. Gavin Newsom sai
That led legislative leaders to speed up what Newsom had proposed as a $1 billion infusion in fire mitigation projects during the fiscal year that starts in July. Newsom signed into law Tuesday a $536 million early action package, roughly $200 million more than he had sought to spend in the first half of this calendar year.
He signed it while awkwardly seated on the step of a firetruck for lack of a better prearranged location, and near a long boat ramp at one of the state’s major reservoirs that this year leads to nothing but grass and rocks where there should be abundant water.
Fire conditions have worsened so much in recent years that once rare fire tornadoes have become more common as megafires create their own weather. Last year’s record-setting wildfire season scorched more than 4% of the state while killing 33 people and destroying nearly 10,500 buildings.
“These are extremes the likes of which these men and women in uniform have never experienced,” Newsom said in Butte County, near where a massive fire burned last year, and not far from where another wind-driven fire nearly leveled the Sierra foothills town of Paradise more than two years ago.
Beth Bowersox, a dispatcher with the state’s firefighting agency, related Tuesday how she named the 2018 Camp Fire after a nearby landmark at the onset of what became California’s deadliest and most destructive wildfire, killing 85 people.
“I took hundreds of 911 calls, some of them from friends and neighbors, some of whom passed (died),” she recalled in an emotional account describing the “innumerable losses.”
She herself had to evacuate her Paradise home, while her firefighter brother and one of his crew were injured by an exploding propane tank.
Amid such evolving conditions, lawmakers said they are now intent on starting to fight the causes of extreme wildfires, in addition to spending billions of dollars to fight fires once they ignite.
The new spending package will distribute about 86% of the money in the form of grants, so the state solicited project proposals from local governments and other organizations even before the budget appropriation, said Jessica Morse, deputy secretary for forest resources management with the California Natural Resources Agency.
It streamlined normal contracting requirements with the goal of getting grants out within weeks instead the usual months, she told Senate budget committee members Monday. And state firefighting agencies are hiring now while starting on projects designed to protect communities.
“This is incredibly urgent,” and the usually slow bureaucracy is working “to ensure that they are delivering at an incredibly fast pace,” she said. Most will go to what she called shovel-ready projects that can begin nearly as soon as funding is available.
The money is nearly seven times more than what had been in this year’s budget for wildfire mitigation, said Democratic Assemblyman Richard Bloom, who helped negotiate the package.
It is going to organizations and agencies “that are as we speak planning how to roll out these efforts in advance and as fire season is beginning,” he said Monday before attending Tuesday’s signing ceremony. “That’s never happened before, and it is extremely important given what we know about wildfire in this state.”
The state spent about $9 billion fighting last year’s record fires, Bloom said, but putting more money into prevention is intended to cut the number of blazes and their devastation.
That includes nearly $200 million to build fuel breaks near vulnerable communities and $283 million to manage forest. Another $25 million is intended to draw $75 million in federal matching money to help make homes less likely to burn.
Republican Assemblyman James Gallagher objected that $12 million in the funding package negotiated by Democratic leaders is going to a coastal land conservancy. Another $125 million is to fulfill a legislative requirement that went unmet last year.
“Far too many communities have been devastated because we’re not getting on top of the fuel reduction,” said Gallagher, who represents fire-prone rural areas, including Paradise.
He voted for the funding but said much more money should go to managing forests.
“The rest of it is lot of smoke and mirrors,” Gallagher quipped. “And let’s face it, we don’t need any more smoke in California.”